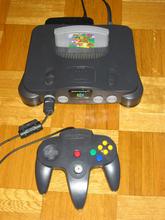 The N64 was Nintendo's last console to use modules instead of discs. N64's big rival was Sony's PlayStation 1 which was already using discs like SEGA's Saturn which was the other rival. The advantage of discs is higher capacity and lower production costs. Modules have almost no access (load) times and you can enhance the capabilities of the console by packing coprocessors into the modules (Nintendo used that technique quite often on the Super NES, e.g. with games like Starfox which had an 3D acceleration chip). Especially the instant access times were a big plus, there were no load screens in N64 games. But the lack of capacity was a big minus.

Powered by an 64-bit MIPS processor running at 93MHz which could also be used in a 32-bit mode. For 3D graphics the N64 had an SGI coprocessor running at 62MHz. That coprocessor could be reprogrammed to feature new/improved graphic capabilities and could also be used for other things than graphics, e.g. it was often used for sound processing as well. As a novum it contained unified RAM, that is the total RAM was shared used both for normal data and rendering as opposed to dedicated data RAM and video RAM. By default the console had 4MB RAM but it was possible to double it to 8MB by plugging in an extra memory module. AFAIK this is the only gaming console to feature expandable RAM. Some games offered better graphics if the RAM expansion was available and some even required it to be present. It is said that the N64 was technically superior to the Sony PlayStation but was more difficult to program and also had some architectural flaws (e.g. only 4kB texture cache). 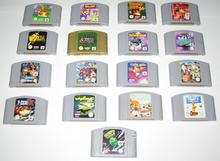 The N64 was the first console to feature an analog stick as we know it today and Super Mario 64 was the killer game that showed how to use it. Mario survived the transition from 2D to 3D very well and Super Mario 64 was again taking the lead in platform games: using the analog stick and introducing a number of new jump'n'run features it was huge success. Another interesting feature of the controller was its expansion port: you could plug in memory cards to store game records or a rumble pack. You could plug in four controllers.

The Nintendo 64 had a number of good games, my favourites are Donkey Kong 64 and Tetrisphere (think 3D Tetris on a sphere with chain-reactions). But the PlayStation had better games with better graphics due to its higher capacity thanks to the discs instead of modules. So ultimately the N64 was outsold by over 300%: the N64 sold around 30 million units while the PlayStation sold more than 100 million. 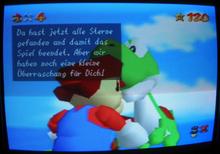 Now I have to mention a small issue which really, really drives me mad, even today: the Worms games by Team 17. Worms Armageddon on the N64 was one of the funniest multiplayer games I've ever played. It has good graphics, was total fun and every player could use its own controller (you can plug in 4 controllers). But later Worms games on the Nintendo GameCube (Worms Blast and Worms 3D) used the totally stupid hot-seat, meaning that you would have to pass around a single controller even though you could plug in 4 controllers into the GameCube as well! How dumb is that ? This is by far the most stupid design decission I've ever seen in a game and totally ruins the fun of those great games for absolutely no reason! You sit on the couch with three friends and constantly have to pass around the controller and maneuver the cable around obstacles like the table. By contrast if everyone has their controller it's absolutely relaxed. I don't think that there's a technical reason for that, it must have been a management decission by the project leader or some different suit idiot (we've got no time to implement and test it, concentrate on this or that instead because everything else is more important or something like that). I even wrote Team 17 and told them what I thought about it (in kind words, of course). I didn't expect a response and got none. I found this issue so deeply disappointing and drove me so mad that Team 17 lost me as a customer: I won't buy a Worms game ever again.