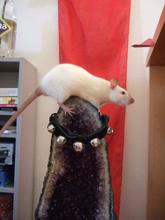 One day we go a phone call from a friend of ours, Kay. Her mum has a young rat and they were looking for a home for it, whether we want to have it. Of course we said yes !

It turned out that a guy was working in his garage when suddenly a small rat came in and ran up his leg. Luckily the guy was not disgusted like many people and just took the rat and put it in a box. He noticed it wasn't a wild rat. So he asked around who would like to have it. He asked Kay's mum who seemed to have remembered Kay talking about us having pet rats. And so the young rat was passed to us.

Kay proposed the name Yukiko which is a japanese girl name meaning "fortunate child". A perfect fit ! Yukiko was a little jester. She loved to climb every item as you can see on the picture. She even managed to climb up the bare metal pipes of our canopy bed, a feat only Nami had accomplished before. Once she climbed up our curtain, balancing on top of it. She had red eyes and thus had severe eye problems. It didn't keep her from trying to jump onto our glass table. She sometimes missed but immediately ran up the couch to try again. 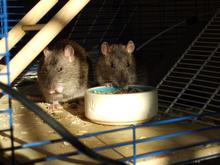 When Yukiko joined us Yuri was already dead, but Nami and Sora were still alive and doing well. Nami was very jealous and wanted to scare away Yukiko who was sitting in another cage. We noticed that we were not able to socialize Nami and Yukiko. But we couldn't leave her alone, either. So we adopted Kazumi and Jun from a gothic girl.

Kazumi and Jun are also japanese girl names. We always had trouble keeping the two apart as they were nearly identical. It was easiest to observe them and keep them apart by their behavior/personalities.

Yukiko didn't recover from a cancer operation. After a few days she died on 19. April 2008. By that time Nami and Sora were also not with us any more.

When she grew older, Jun got ill. She seemed to have had an infection in her abdomen, most likely her ovaries. Treatment didn't help and eventually she died on 13. July 2008.

Kazumi had a total of three cancer operations throughout her life which prolonged it by more than a year. We had to have her euthanized as we didn't want to have her suffer through a fourth operation. She died on 4. July 2009.