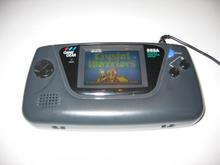 The SEGA GameGear is a nice handheld which was released in 1991, and one of the first handhelds to sport a (backlit !) color LCD display, seven years before Nintendo released their GameBoy Color (which came quite late IMHO). The first colored handheld seems to be the Atari Lynx which was released in 1989 (thanks to Claus-Dieter Volko for pointing that out). The GameGear contains an 8-bit Z80 CPU (the predecessor of the 8088/8086 on which the PCs as we know them are based), running at 3.58 MHz and has 64kB main and 64kB video memory. The display was a backlit color LCD with a resolution of 160x144 and the video chip is able to display 64 colors at a time.

Although technical supperior to the GameBoy in many aspects (the GameBoys' only advantages are that its' Z80 was running faster and that the display had a higher resolution but only 4 shades of gray) it never was as sucessful as the GameBoy mainly for cost reasons: the GameGear was about twice as expensive as the GameBoy. Oh, and a GameBoy runs about 6+ hours on 4 AA batteries... the GameGear only about two and a half hours with 6 AA batteries (the backlit color LCD eats a lot of power).

Nevertheless there are some great games avaible for the GameGear. And it has some nice add-ons: there is a TV adapter which turns your GameGear into a small mobile TV and another adapter allows you to play SEGA MasterSystem games, which are almost bigger than the GameGear itself ;-)

Unfortunately I had lent my GameGear to a friend, but then we lost contact and I've never seen my GameGear again. Years later I remembered this nice handheld and wanted to buy one again. I had to pay as much in 2002 to get one in original packing and condition as I payed back in ca. 1993/1994 when I bought my first GameGear (about DM 300,- which should be about $150), but getting it in "mint" condition was worth the price to me.