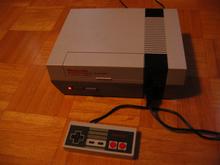 The Nintento Entertainment System (NES), also known as Famicom (Family Computer) in Japan, is one of the most succesful and influencial consoles. Released in 1983 in Japan, 1985 in America and 1986 in Europe, the NES (or Famicom) became a huge success due to Shigeru Miyamoto's great games such as Donkey Kong, the Super Mario Bros. games and Zelda as well as lots of other great games. Nintendo sold over 50 million of this console and over 350 million game cartridges.

Powered by an 8-bit 6502 CPU running at about 1.78 MHz it was based on a rather slow CPU but featured some good chips to aid the CPU, such as the so-called PPU (Picture Processing Unit, the video chip). The graphic capabilities are a maximum resolution of 256x224 with a maximum of 25 colors per screen line (scanline). So with some clever trickery you could slightly increase the number of colors displayed on screen. Games can use just 2kb RAM, 2kb video memory and 256 bytes sprite positioning memory. Compared to its competitor, the SEGA MasterSystem which was released in 1986, the NES was technically much weaker in nearly all areas but was more successful due to its better games and probably marketing.

The NES was the first console I had contact with, around 1989. I later bought my own in 2002 because of the great memories I had about that nice machine, mainly about Super Mario Bros. 1 and 3 which I still enjoy today from time to time... those two are really great games and set milestones in the jump'n'run game genre.

Sidenote: A very interesting story in which Nintendo and their NES were involved is the weird Tetris history. A must-read.