Also known as SEGA Genesis in America, the MegaDrive was released in 1988 in Japan, 1989 in America und 1990 in Europe. At first it competed with the Nintendo Entertainment System and shortly afterwards with the Super Nintendo Entertainment System. The MegaDrive gained much popularity in Japan and Europe, where it was even more successful than the SNES in some areas. It remained popular among RPG fans and had a good number of excellent games.

The console itself is powered by a Motorola 68000, the same processor the popular Commodore Amiga was based on, running at about 7.6 MHz. It has a Yahama sound chip with excellent sound quality, a Texas Instruments Programmable Sound Generator and a Video Display Processor allowing 64 colors out of a palette of 512 colors at a resolution of 320x224. The MegaDrive also has a Z80 processor like the SEGA MasterSystem, SEGA GameGear, and Nintendo GameBoy, which allowed SEGA MasterSystem games to be played through an adapter. It has 64kB RAM plus 8kB sound memory plus 64kB video memory.

SEGA later released an add-ons to improve the MegaDrive, the Mega CD. Instead of the ROM cartridges it uses CDs for the games. There was also an improved version of the MegaDrive, the MegaDrive II and later the SEGA 32X, which was introduced to fill the gap between the slowly outdating MegaDrive and SEGAs next generation console, the Saturn, because SEGA knew it would take some time to develop the Saturn. Last but not least there is also a "portable" version called Nomad. 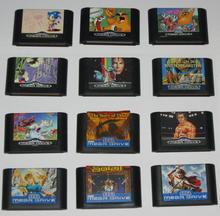 What Mario was to Nintendo, Sonic was to SEGA: the Sonic the Hedgehog series became a huge success because they were very well done jump'n'run games, with good gameplay. They demonstrated scrolling in a speed unknown before, sometimes your eyes couldn't keep up (luckily those parts were seldom and not frustating).

One of my all-time-favourite games is a MegaDrive game called Toe Jam & Earl, in which you played two "funky" aliens on their search for pieces of their scattered space ship. On your journey you have to gather gifts and use them... some are good, some harm you, and you first have to find out what's inside what gift box. You have to avoid "earthlings" which are the monsters in this game (like a guy with a lawn mower or a dentist). The game features nice humour and nice music, very original and unique gameplay and is best played together with a friend where fun doubles :-) If you already own a MegaDrive and don't know this game, do yourself a favour and get this game ! It's still avaible via eBay and other online stores/markets. But beware the sequel, Toe Jam & Earl 2: Panic on Funkotron. It's something totally different and has nothing to do with the first part (except the characters).

I also did some programming on the MegaDrive for fun: I learned a lot while doing so (e.g. Motorola 68000 assembler and that 64kB can be a lot of space).