After Yukiko passed away we wanted to get young rats so that Kazumi or Jun would not be alone when one or the other would die. We unknowingly asked a breeder. She sent us photos of the then two weeks old rats and we chose three.

But when she turned up with the rats four weeks later it turned out some where what we call "Qualzucht" in German: problem breeds or suffering breeds might be adequate translations. Ylvi is a "Rex" which means she gets curly hair. The problem is the whiskers are curled as well, and whiskers are very important organs for rats. We noticed she also had a "Dumbo" (their ears are not on top of the head but on the sides). That girl had been driving all day with the small rats and her mother and she mentioned that it'll be a few more hours until she would arrive home. We couldn't leave the fourth rat alone like that and endure another hour long drive so we adopted her as well. 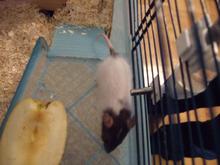 One result of the breeder bitch driving all day long with her car window open was that all four rats caught a cold. Aki got it worst: she got some pneumonia. Even though we had all four treated the next day we got them, Aki's condition grew worse. We visited the vet every two days with Aki. It was horrifying: breathing was very difficult for her and eventually it was so difficult for her that she couldn't do anything else: she could not sleep any more, she could not eat any more and eventually she could not even drink any more. After a week, on 13. June 2008, she surrendered. You can see her in the first picture on this page.

Like Sora, Kiyoko was a nice, calm and relaxed rat. She was an almost-albino. On 18. February 2010 she unexpectedly died during a cancer operation. 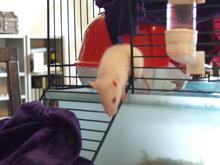 Ylvi is a "rex" breed and we can easily see why these breeds are considered to be suffering breeds. She's lucky in that the her curled whiskers and eyelashes don't cause problems (I heard often "rex" suffer from infections of the eye due to eyelashes constantly touching the eye). But her skin is very sensitive: injections leave big bruises. On 20. January 2010 she had her second cancer operation. But the bigger problem was that she got a bruise from an injection and the border of her bandage. That bruise almost completely covered her left side. Once it hardened she tried to rip off the crust which resulted in a huge wound. The result was being trapped in bandages for almost a month, almost getting insane due to itching.

We never had a rat that enjoyed getting petted and fondled like Ylvi. She often comes to the cage door and lies down in front of it so she can be comfortably petted. You could pet her for hours.

Una, on the other hand, doesn't like to be touched at all. While Una is a "dumbo" which is considered to be a suffering breed she's healthy and cheeky. She's a real beauty.

Kiyoko unexpectedly died during a cancer operation on 18. February 2010. The cancer was small and she was strong and healthy so it came as a complete surprise.

We then started looking for young rats again so that neither Uno nor Ylvi would be alone should one of them die. So we got Alice and Amy. One month later we got Akane and Miu from the same girl that gave us Amy. Meanwhile, we got Una, Ylvi, Alice and Amy together. That worked out quite well.

In the night to Reginas birthday (23. April), we noticed Una was very weak. We also found blood stains and found out they stem from her behind. It was already 1 o'clock in the morning but luckily found out that we have an animal hospital nearby (we normally go to a vet who is very experienced with rats). Eventually we had to have her euthanized at about 3 o'clock in the morning. Not something you like to experience on your birthday.

Now only Ylvi is left. She gets along with Alice and Amy nicely, but unfortunately really hates Akane and Miu so we can't have all rats in the same cage at the moment. I hope we can get Ylvi to accept Akane and Miu eventually.